The remake of the original Spyro Adventure Trilogy was great news for players.

The publisher of the game, Activision, unsuccessfully tried to hide information about it before the official announcement, but rumors about the release of the collection began to circulate back in 2017, and on November 13, 2018, a full-fledged remake of the trilogy of games about Spyro took place.

The Spyro Reignited Trilogy includes the first three games from the original trilogy:

It is an example of the perfect remake of a sensational hit twenty years ago. The collection of games about the adventures of the purple dragon has changed little in terms of gameplay, but its task is different. The developers only wanted to ennoble the classic series, tighten up the graphics, comb the hair for the modern public.

The game was warmly received by critics, and it has sold five million copies only on the PlayStation 4 while being released on every possible modern platform.

The World and Locations

The visual design in Spyro Reignited Trilogy deserves a ton of compliments. It seems like the same world with the same characters, but at the same time, the game is played with new colors and is perceived in a completely new way!

First of all, I would like to note the excellent work with lighting and color palette. Moreover, the publisher devoted a lot of time and effort to work out the details. Every mountain, every building, and every object – everything, without exception, recreated from scratch using the Unreal Engine. Watching your favorite childhood game through the prism of everything new is an incomparable pleasure!

Moreover, the elaboration of the environment often goes beyond the original source. The studio not only drew new textures for everything and everyone, but also introduced new decor elements. Thanks to these seemingly little things, the game world feels truly magical and new.

For returning players, much of the joy of Spyro Reignited Trilogy comes from rediscovering familiar faces in a new and stylish twist. Gone the rigid polygonal lines and new soft designs inspired by Dreamworks. Honestly, I’m glad Spyro is finally redesigned the way he deserves it.

The characters have become more caricatured and “alive” (some have completely changed their appearance), but in this way they fit well into the surroundings. Spyro, of course, turned out to be the most beautiful of all. Charismatic, witty – it is even interesting to watch him; perhaps this is exactly how it was originally conceived. And he is often not averse to chatting, since there is someone with whom, because in the first part, the dragons were improved and their looks were finalized. 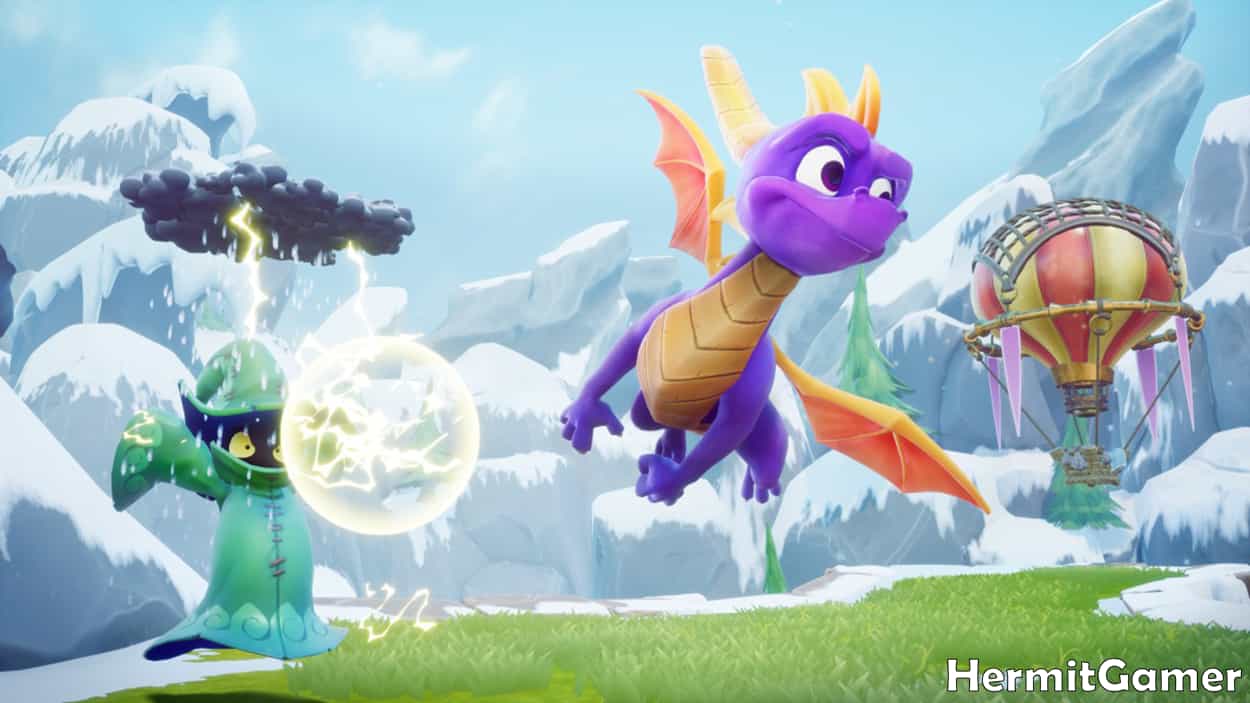 When you launch the second part, it has everything that players fell in love with Spyro 20 years ago – a variety of levels, mini-games and simple but fun fights. In my recollection, all the parts of Spyro have merged into one thing, so it’s even difficult to remember how one differs from the other. And if you love this series of games, but have already forgotten it a bit, I recommend playing Reignited Trilogy.

A few words about the gameplay itself for those who did not find the original. In a nutshell: a typical 3D platformer. There are levels with monsters and all kinds of loot that are scattered everywhere. In Spyro Reignited Trilogy, diamonds are the main collection item. Moreover, in the second and third parts, they are needed not only for gathering. In addition to them, there are other items, but already fundamentally related to the plot.

In fact, this is the whole game. You need to pass the level and move on to the next. Fascinating passage is primarily due to the variety of worlds and monsters – and not the least thanks to the mini-games that first appeared in the sequel to the original.

Spyro Reignited Trilogy plays much faster than the original from the late 90s. But you don’t realize it right away. On land and in water, the increased speed of Spyro’s movement is only a plus. But in the air … To be honest, bonus levels with flights were difficult before. Now they have become a real test not for the faint of heart. Did you miss one target or hesitate for at least a second? Enough, start over. 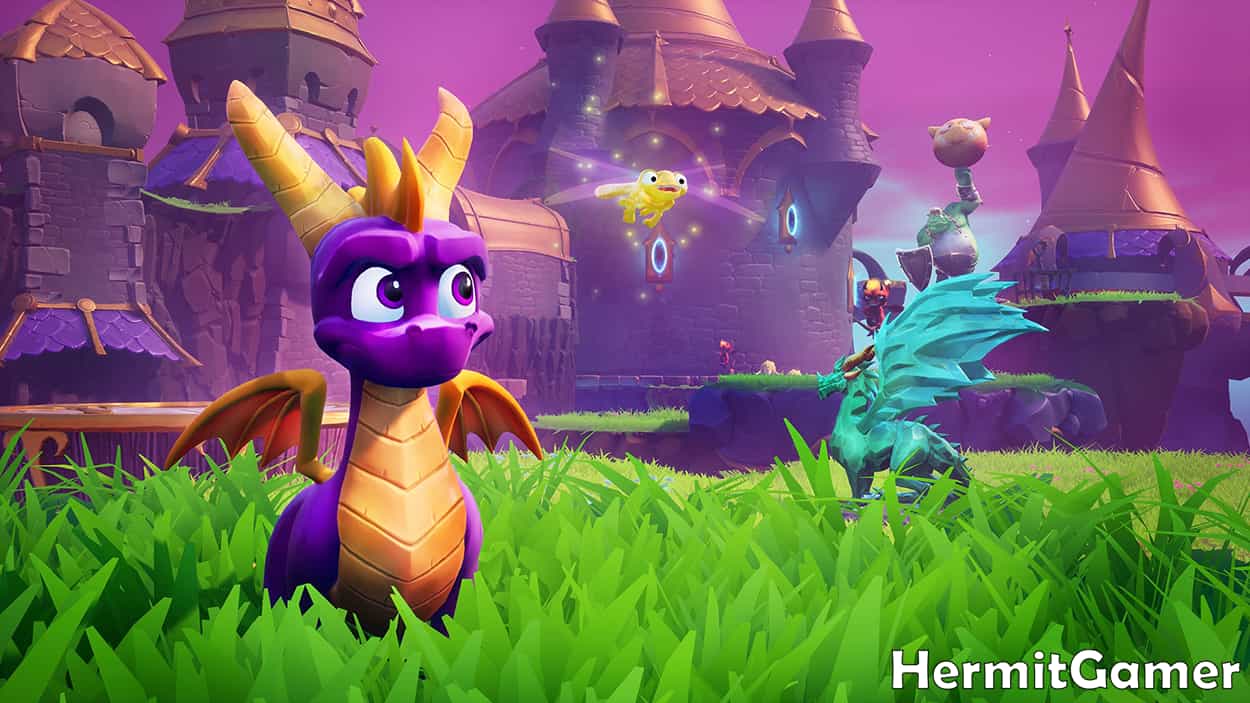 The interface and menus have become more convenient and laconic. Previously, you had to fly from one place to another in order to eventually get to the third. Now you just need to select the desired location in the menu, click – and now you are where you need it.

The same goes for saving, especially in the first part. Checkpoints are triggered several times in a row when you walk past them. And additional tasks are displayed right above the heads of the characters. No unnecessary gestures from the player are required. All the best is focused on the main thing – battles and level clearing.

The original Spyro soundtrack was written by The Police drummer, Stuart Copeland. He created many memorable melodies, the sound of which in the remake for some reason was greatly changed. In Spyro Reignited Trilogy, the fairytale music of the original began to resemble unremarkable soundtracks. Fortunately, old music can be turned back on in the settings.

Some of the older controls have been updated as the camera can now be rotated with the left stick instead of the right trigger, which has been replaced with flame mechanics. It’s much more convenient – although you also have the option to revert to retro controls if you want to.

Since as a child I played all 3 parts in a row, this time I decided to repeat these emotions, so I started the walkthrough with the first part: Spyro the Dragon. At the same time, for a player who was not previously familiar with this series of games, the first part may seem boring.

In the first part, there are only a few mechanics that the player can use. By the middle of the game, everything begins to gradually pall and bore, and the passage of locations may seem the same type.

However, this was the very first project in the Spyro game series, so I gladly went through it from start to finish.

The plot of the game is that the villain Gnasty Gnorc turned all dragons, except Spyro, into statues, and now the purple hero has to run through all the locations, simultaneously freeing all the dragons, and at the end fight Gnasty Gnorc. 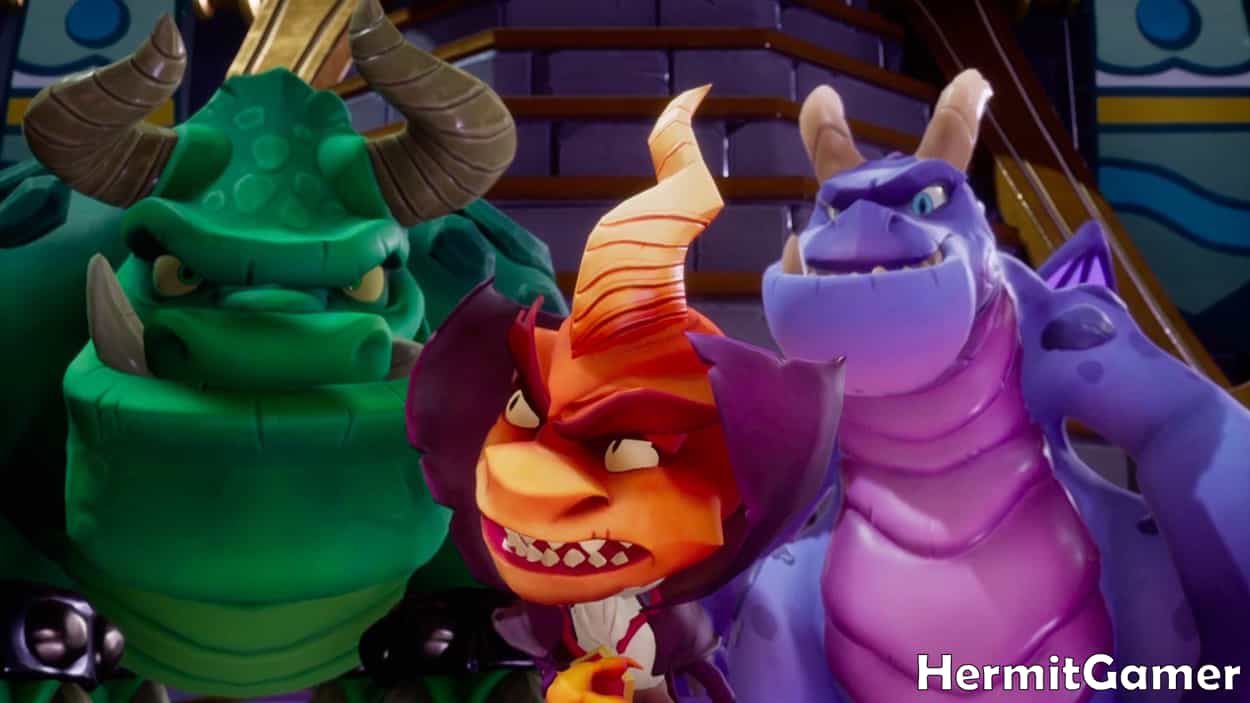 The second part is a completely different matter. Spyro: Ripto’s Rage is a sequel to the original, but in reality the games are loosely coupled. But in the second Spyro, a full-fledged narrative already appears: there are many cut-scenes and dialogues (unlike the original Spyro the Dragon, in which there are exactly two cutscenes – at the beginning and at the end of the game). And the characters of the second part then appear in the third – in general, by skipping the first part, you will not lose anything at all.

In the second game, elements of metroidvania appear: for example, Spyro can learn to swim underwater or climb walls. There are more levels in it than in the first part, and they are not so linear – in a word, playing it is simply more interesting.

Spyro 3: Year of the Dragon

The third part, Spyro 3: Year of the Dragon, would have won the love of the public even if it debuted this year. This is almost an exemplary adventure in which Insomniac Games finally understood which elements in the first two games turned out to be winning, and which ones it is desirable to get rid of.

The final part of the trilogy offers the most diverse locations in the history of the series with very funny mini-games – in one of them Spyro has to get on a skateboard and perform tricks, catching some flying freaks. Such episodes are unlikely to be remembered for long, but they are so fascinating that there is simply no time to get bored here.

They paid even more attention to the plot component – Spyro again needs to save the dragons, but not the big ones, as in the first part, but the cubs that hatch from the eggs stolen by the enemies. Charismatic characters, Disney-themed videos, funny dialogues and comical situations are enough. Time flies by, the game is so wonderful and bright, and the remake has not lost this charm.

Despite the fact that the final part of the trilogy is considered by many to be the best, it is better to start acquaintance with the series not with it – after the third the rest will seem not so interesting, although they are also good in their own way.

If you miss good arcade platformers, there is a chance to discover something new. Or the old one, but fresh. Spyro Reignited Trilogy’s target audience is all ages and all generations.

The game is primarily aimed at those who feel nostalgic at the sight of the purple dragon: in the remake, absolutely everything remains the same as it was on PS One. But for new players, the game can be a pleasant discovery.

If you do not intend to complete the trilogy for 100% (collecting absolutely all Gems and other items), then the complete passage of all three parts of the game can take up to 30 hours.

How many worlds are in Spyro Reignited Trilogy?

There are four total worlds to visit in Reignited Trilogy: Sunrise Spring, Midday Garden, Evening Lake, and Midnight Mountain. However, every game contains over 50 locations.