In the early stages of the game, approaching the hardmod, the player starts to determine which character class he wants to play. If you want to try yourself as a shooter/ranger, then the Minishark is one of the best weapons you can get.

Terraria Minishark has the highest damage per second available in pre-hard mode. Despite the fact that ammunition for it needs to be bought quite often, there will be much more advantages from this weapon than disadvantages. Moreover, the ammo is not very expensive from the Merchant NPC.

In this guide, you will learn everything about the Minishark: is it worth your time, it’s advantages, disadvantages, how to obtain it, what ammunition to use, as well as tips for using the weapon.

Minishark is an excellent ranged weapon that is almost fully automatic and does not require a constant click of the mouse button. The weapon shoots ammunition (bullets) at high speed, quickly consumes ammo, but at the same time, it is very effective against most enemies in pre-hardmode.

Very high rate of fire. Allows you to fire a huge amount of bullets in a short period of time and provides a very high DPS!

Minishark Terraria Unique ability – 33% chance not to lose the ammo. This feature seems rather insignificant, but in fact, it saves lots of the player’s ammunition. Moreover, you can greatly increase this chance.

Weapon range. The mini-shark has a very good fire range, which will allow the player to keep the enemy at the distance and easily dodge the attacks. Moreover, it will be very useful during boss fights, for example against Queen Bee or Skeletron.

How to Get the Minishark in Terraria

In order to obtain a Minishark, you need to do a few actions. You can only purchase it from the Arms Dealer NPC, which you need to summon. The main conditions for the appearance of an Arms Dealer are:

It is quite easy to build the room for NPC, but you need to do a certain series of actions to summon the Arms Dealer and to purchase the Minishark.

How to Get a Weapon to Summon the Arms Dealer

First of all, you need to go to the Corruption biome and break the crimson heart or shadow orb (depending on what type of corruption biome is in your world). There you will find ‘The Undertaker’ gun or a ‘Musket’, respectively. As all the spheres can drop several different items with some chance, you may have to break several to obtain a musket/gun. 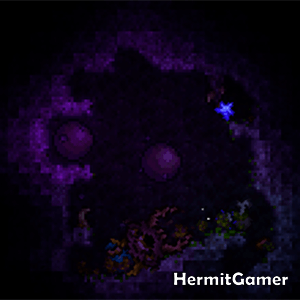 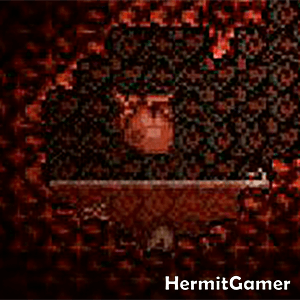 Do not forget to take the bombs! You will need them to destroy hearts/orbs. You can buy them from the Demolitionist. Furthermore, be careful, as the destruction of three shadow orbs or hearts will trigger a boss (the Brain of a Cthulhu or Eater of Worlds, depending on the biome).

There is also an alternative way to obtain a weapon. While wandering through the dungeons, you can find Underground Cabins, and with a small probability, there will be a chest with a sawn-off shotgun. This weapon will also work well for summoning Arms Dealer.

How to Create a Room for NPC 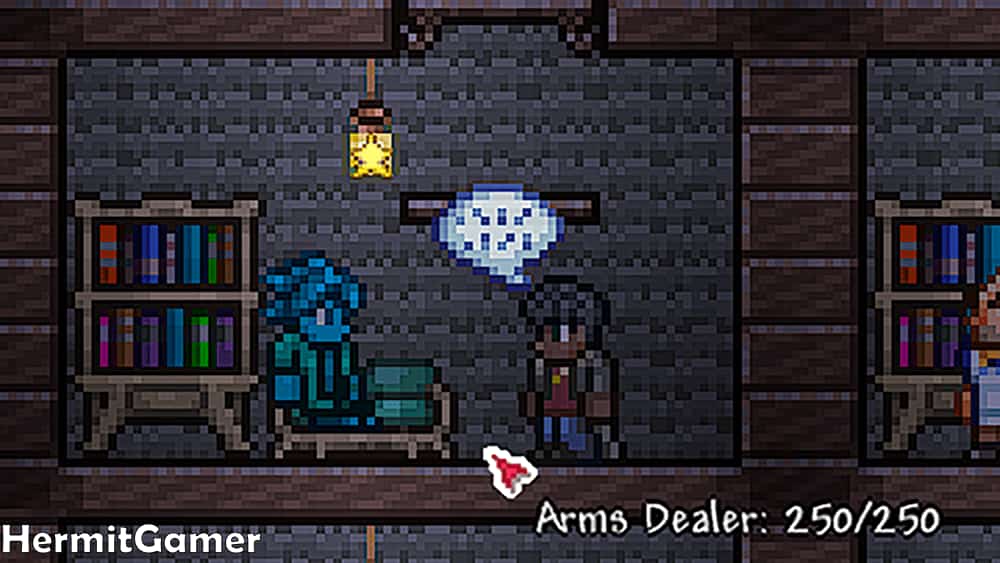 As soon as you get the necessary weapons, you can proceed to the second stage – building a house for the NPC. The house must have a floor, walls, a table, a chair, and a flashlight.

How to Buy the Terraria Minishark

Once an Arms Dealer appears, you can buy a Minishark for 35 gold coins. One of the fastest ways to make money in the early game is to kill the Eye of Cthulhu or the King Slime multiple times.

Moreover, there is a simpler, but lengthy method. You can mine a lot of ore (copper, iron), turn them into ingots, and sell them to a Merchant.

If the arms dealer likes the conditions in which he is living (biome, neighbors), then all the goods will cost less, including a Minishark and ammo. 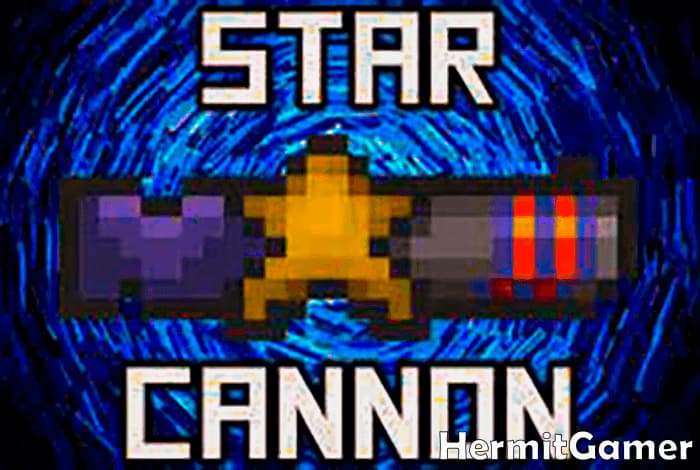 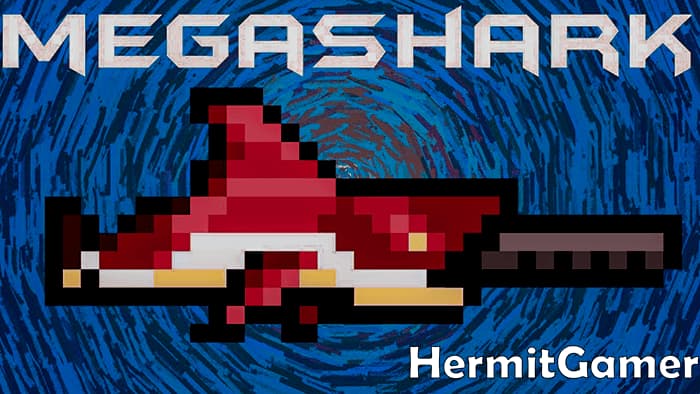 With the help of the Minishark, you can create 2 weapons – Star Cannon, which can be useful in a pre-hard mode game against crowds of enemies, and Megashark, which will be an indispensable weapon for a shooter in hard mode.

1. As a Minishark in Terraria does little damage in one shot, opponents even with average armor can become a hindrance. That is why it will be better to use items that reduce the armor of enemy creatures.

2. Collect items that will increase the chance of critical damage. Due to the incredible rate of fire of the Minishark, it fires many shots per second, and the higher the chance of a critical hit, the more damage you deal.

3. Increase the chance of not consuming the ammo during the fire, so as not to spend a lot of money on buying them and not being empty in the battle. You can do this in two ways:

4. Find the Goblin Tinkerer and enchant the weapon on “Demonic”. You need a lot of gold for this, but it’s definitely worth it, as this is Terraria Minishark best modifier, which upgrades its damage and rate of fire to the maximum and increases your DPS.

Unfortunately, you will not be able to amplify the damage from the Minishark with bullets in pre-hard mode. It is possible to buy musket bullets and boost them to silver or tungenst, but it doesn’t make much sense, and it will be very expensive. It’s best not to bother and use regular, musket bullets.