Sometimes even most simple bosses a lot of problems. Lute is good, but how to get it is not clear – this is exactly what can be said about the Queen Bee Terraria. This is the starting point and can be very easy to deal with, but first you need to find her. The problem is that many new players do not know where the Queen Bee is and how to defeat her.

We will try to tell you in detail about the Queen of Bees, consider the necessary equipment, preparation of the arena and methods of summoning the Terraria Queen Bee!

Some Basic Info About the Boss 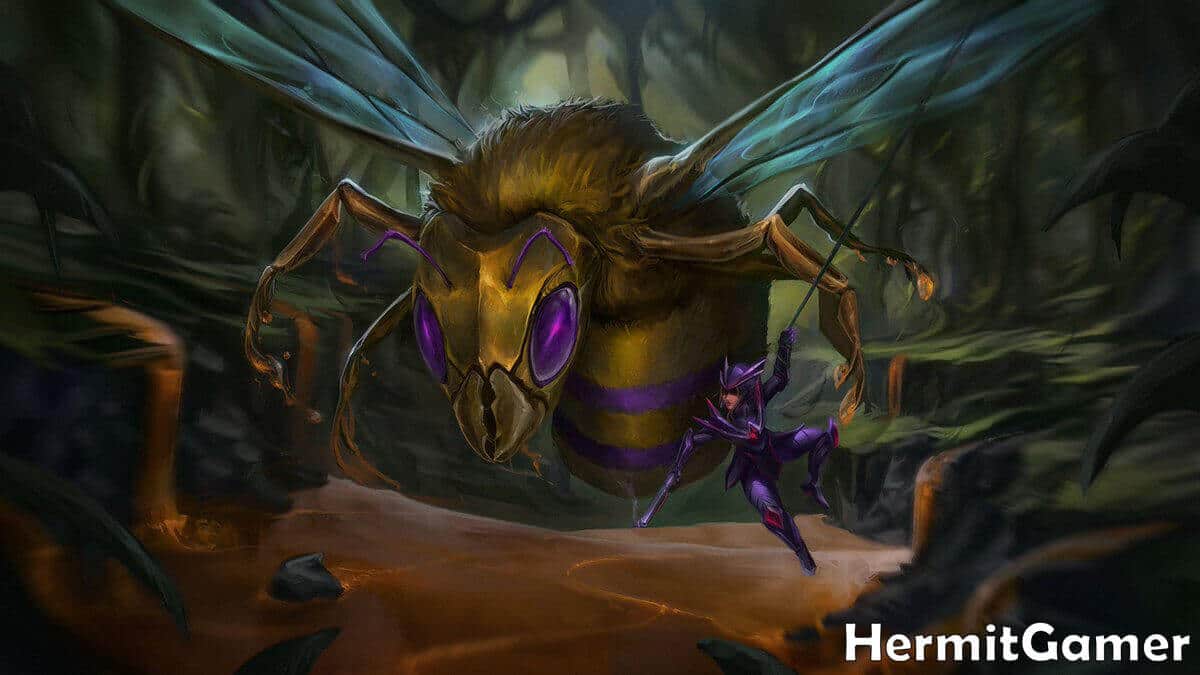 The Bee Queen is a boss in the jungle, available before entering Hard Mode. This boss inflicts 30 Done, has 3400 Health and 8 Defense, which is generally not bad for the starting enemy. Moreover, fast dynamics, flights and air attacks do not allow the player to relax for a minute.

Even though this boss is optional to complete the game, we highly recommend killing her. Defeating the Queen is a prerequisite for the appearance of a healer in your world, and this NPC is extremely useful for further gameplay.

Since the boss is not very strong, we advise you to fight with him after the Slug King, the Eye of Cthulhu and Brain of Cthulhu or the Eater of Worlds. Moreover, items found after killing Terraria Queen Bee can be very helpful in the battle with Skeletron.

The attacks of the Queen Bee depend on the difficulty of the game.

This boss fight is pretty simple, but it is still worth knowing a few points and tactics for the fight. 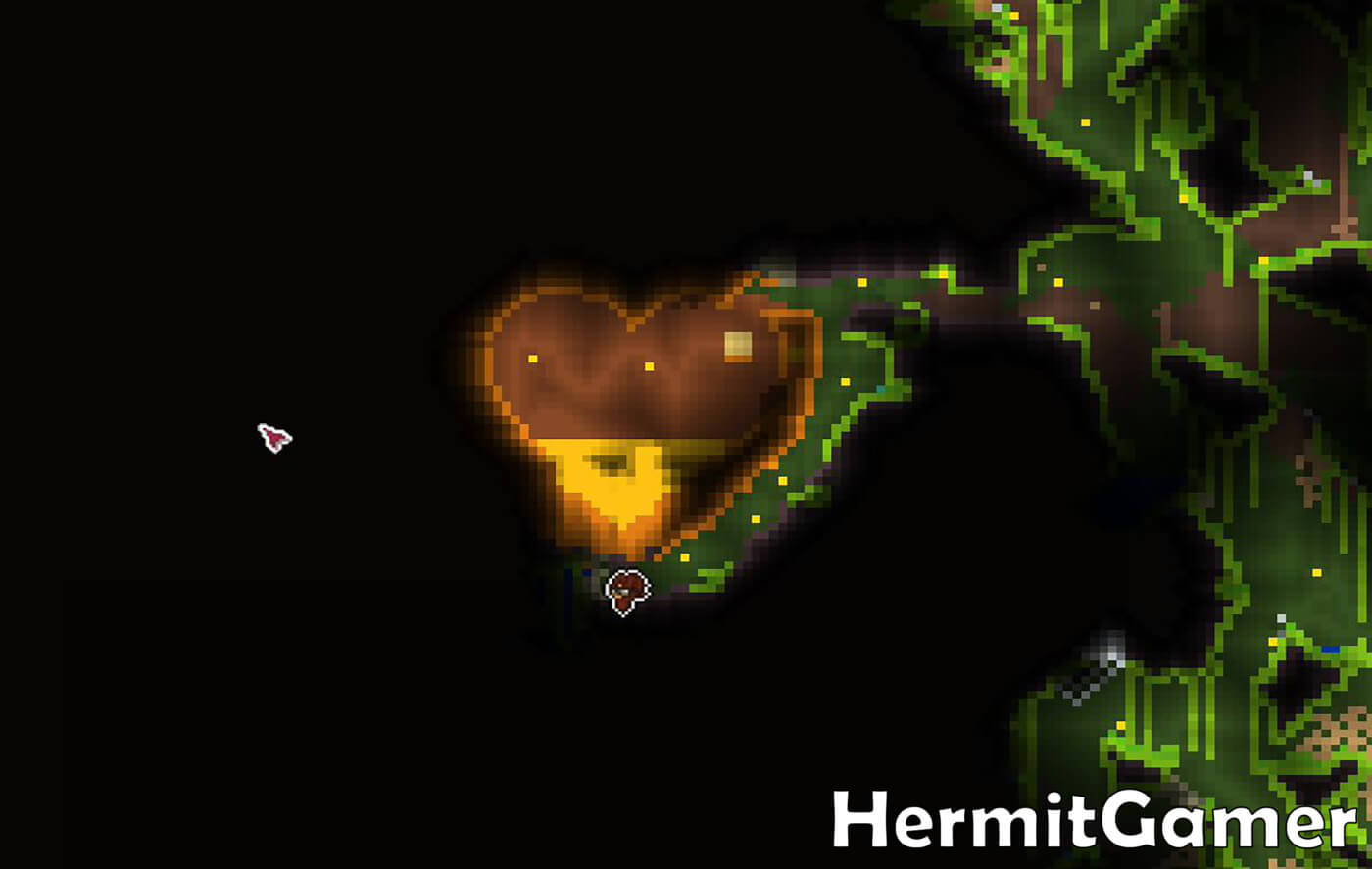 Finding a queen bee is not very difficult. To do this, you can simply explore later in the jungle and you will quickly find a hive. It looks like a wall of yellow-orange blocks (honeycombs) on the green, jungle map, so it’s hard to skip it. There are usually several hives in the jungle. Only if you are playing in a small world can you have one hive, but this is rare.

When you find a hive, it is best not to go into it from the bottom, as you can drain all the honey. Instead, it’s best to go from above. Also, you must be prepared for the attack of the bees during the destruction of the hive blocks. ATTENTION! If you break too many hive blocks, the boss may spawn and attack you when you’re not ready, so don’t destroy the hive much at first.

Once inside, don’t rush to summon the boss! It’s time to prepare a little.

Arena for Battle with Queen Bee

For a start, it is worth expanding the battlefield, since the hive can sometimes be really small, and in the battle you need to maneuver.

Next, we need to set up several rows of platforms throughout the hive, because the Queen Bee will fly all the time, and you will need supports to get to her. They will also help a lot to dodge her physical attacks when she dashes from side to side.

It is also very important for us to regenerate our health during the battle. It is best to put a Campfire and Heart Lantern somewhere nearby, which will speed up health regeneration. It is also important to know that honey will also restore your health while you are in it. This can help you a lot when fighting Queen Bee Terraria.

Good Equipment is a Must!

To fight the Bee, you can use shurikens as weapons. Although they have a low DPS, their range and attack speed allow them to regularly deal damage to the Queen of Bees. It is better to buy them in large quantities so that you will definitely have enough until the end of the battle. Moreover, you can try to combine a Minishark with shurikens during the battle.

If you are an experienced player, then tin or copper armor may well be enough for you. If you are playing in Expert Mode or Master Mode, we recommend that you wear better armor.

Be sure to take your healing potions with you. 7-10 potions should be enough for you, but this may depend on the difficulty level of the game.

It is also very important to have the maximum quantity of character health, namely 400 at this stage of the game. With such a volume of health, problems should not arise. It will not be superfluous to have a tsunami in a bottle with you, but better paired with a cloud in a bottle and a grappling hook, which you bring to make after your trip to the jungle dungeons.

We are now fully prepared to summon the boss!

Summoning the Bee, like most other bosses, can be done in two ways.

First. As mentioned above, this is to find the hive in the jungle where the Queen Bee’s cocoon is located. This cocoon breaks from the slightest touch, so you should be careful when building the arena. After breaking the larva you will summon the Queen.

Second. With the help of a bee mass that is created on a demonic altar. To summon you will need: 5 blocks of honey, 1 sting, 5 honeycomb blocks and 1 bottle of honey.

Having summoned the Queen, be ready for battle, as she appears after a couple of seconds. 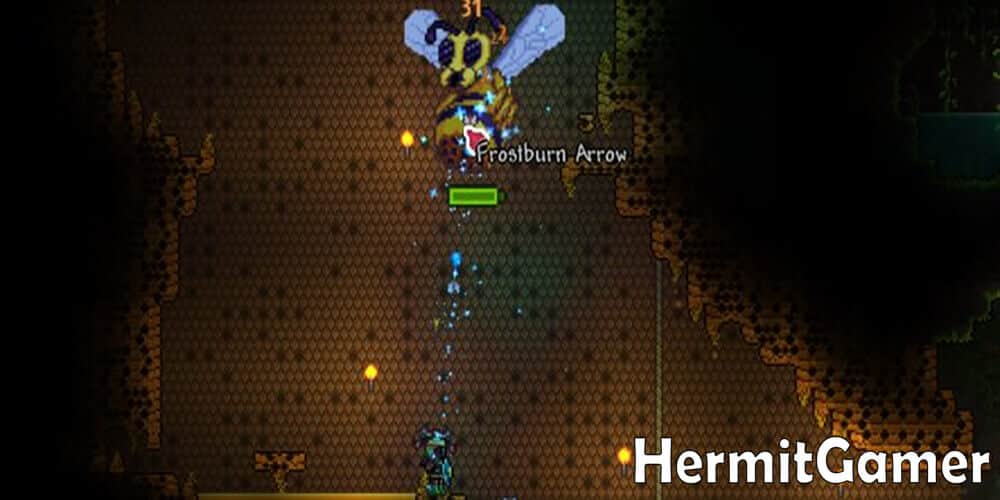 The Queen Bee will start the fight, attacking you with three dashes from left to right, dealing 30 damage to the player. With a cloud in a bottle or on a hook, you can very easily maneuver her attacks by jumping up and then dropping down.

Immediately after that, the Queen Bee starts hovering in the air above the character and launching some bees at you, from which hearts fall out when killed. Thanks to this, the player can quickly replenish his health. Moreover, while this attack is active, you can also stand in the honey, which will further increase your health regeneration. At this point, you can attack her with shurikens, or other long-range weapons.

If all is well with your health, you can jump to it on the platforms and start attacking with melee weapons.

Then the bee again begins to attack you with three spurts. And so in a circle.

Also, sometimes she begins to fly and bombard you with poisonous stings. At this point, it is best to dodge them, as they can cause serious damage in the future, especially if you are playing on high difficulty levels. 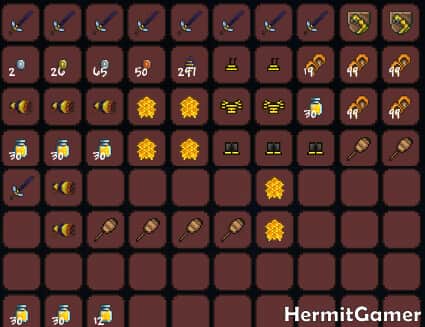 After defeating her, one of three types of weapons will always drop:

The last point will be extremely useful against the Skeletron!

Moreover, with a separate chance, you can drop a Hive Wand, Honeycomb and nectar (5%). At higher difficulty levels, this chance increases.

If you play on Expert difficulty, you will receive an additional reward with 100% certainty – Hive Pack. On Master Mode you will get Sparkling Honey.

After defeating the Queen of Bees, if you have free space for an NPC, the Witch Doctor will move to your city.